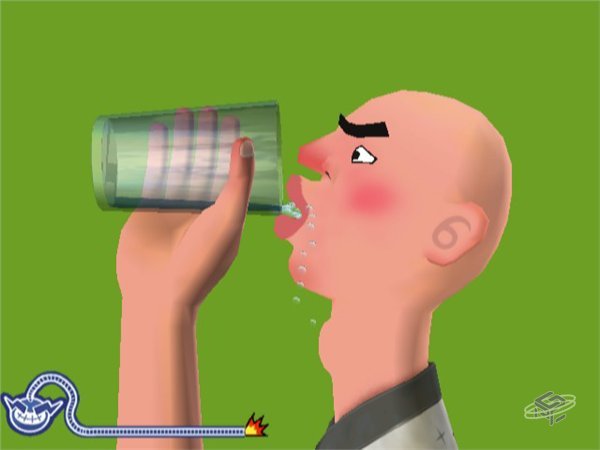 Gameplay
WarioWare: Smooth Moves requires the player to hold the Wii Remote (called the "Form Baton" within the game's story) in a variety of different ways, which the game calls "forms". Examples of such forms include "The Umbrella" (holding the Wii Remote vertically like one would hold an umbrella handle) or "The Elephant" (holding the bottom end of the Wii Remote against the nose, emulating an elephant's trunk). One special stage also incorporates the Nunchuk extension controller in the "The Diner" form (called the "Balance Stone" within the game), held in conjunction with the Wii Remote in 3 different orientations. Each microgame is associated with a specific form and performing an action starting from that form, and the player must frequently switch between forms in order to keep up with the pace of the gameplay. The form that is required for each minigame is shown to the player to allow the player some time to position the Wii Remote correctly, though as with the microgames themselves, this amount of time decreases as the difficulty of the game increases.

The game's presentation is very similar to past games in the series. Each stage is represented by a specific member of the WarioWare cast, and the various individual microgames are divided between them. A stage begins with an introductory story sequence featuring the character and concludes with a boss stage (a longer, more complex microgame), followed by the second part of the story. Once a character's story has been completed once, the stage becomes an endurance stage that lasts as long as the player does not run out of lives. Once all story mode stages have been cleared, an all-encompassing endurance stage is unlocked that presents the entire catalog of microgames. Scoring in the game returns to the traditional WarioWare style of scoring by games played, instead of games cleared as in WarioWare: Twisted!.

Great review! But do you think I could play it with my feet? (aka an alternative way to do elephant trunk)

I do wanna buy WarioWare but i dont have time to go to the city. XD
Z

Good review, I disagree with the score.
The Multiplayer is bad, so are the mini games and there is hardly any replay value.