Rayman was created by Michel Ancel, a French game designer for Ubisoft. Another title he created was 'Beyond Good and Evil', a game now with cult status. In '92 he first started working on Rayman, and in'95 it was released on the Atari Jaguar, and '96 for the PS1. "On April 5, 2006, Ubisoft announced Ancel was leading the development of the fourth game in the Rayman series, Rayman Raving Rabbids, for the Nintendo Wii. The game began production in early 2005 and was released on November 15 2006 for the launch of the Wii. However, Ancel was notably absent from the project after its E3 announcement, and he has made no public appearances regarding the game after the development team switched focus from a free-roaming platformer to the final minigames format shortly after E3. It is rumoured that he bailed out from the project and hasn't been heard of ever since, as of August 2007". Wiki link

Ravin Rabbid was a game I got with my Wii. I bought it after seeing a youtube video of two guys playing on it. They were dancing around, looking pretty foolish. (Something like this video : http://www.youtube.com/watch?v=hv8q_ZMSURU&mode=related&search=) 'Excellent!' I thought, 'Perfect for when my friends come over.' as it is a multi-player game, up to 4 players.
The game consists of 75 mini games, which you can play indivdually ('Score' mode) or in the Story mode. The story mode is played out in the style of 'The Gladiator'. Rayman, a kind of duck-like humanoid (without being a duck or human), with floating limbs, was having a nice little picinic with some 'Baby Globoxes', when the Ravin' Rabbids rose from benethe them and kidnapped them all. The Rabbids had been planning this for many years. Rayman, our unlikely hero, is thrown into an arena, watched by many more Rabbids all Booing and Hissing from the stalls, and every morning Rayman is expected to play, and complete three out of four, of the many games they have to offer, before throwing him back in to a cell with a useless award; a toilet Plunger!!
In his cell there are a few features which are cunningly disquised as every day objects; a toilet which he uses to go over past events. A wardrobe, where he can change his outfit. And a Jukebox, obviously to have a listen to some 'Rayman' music. More items get added to each feature after you've completed more of the game. Also as the game progresses Rayman earns more and more plungers, which he eventually uses as a means to escape.
In the score mode you can choose which games to play. All the games are very different from each other, and there are 35 different sets of controls. After you play a game you are awarded with points and a unique code which can be entered in to Raymanzone.com to see how well you're doing with the rest of the world. Although not an automatic function on the Wii, I have used it and it was quite fun. I was forth at one point on a dancing game to much amazement.
For your well earned points you receive bonuses, in the form of videos and artwork. It doesn't seem much, but the videos are well worth the time you spend earning your points. They are little clips or teasers for the game, and surprisingly doesn't use Rayman. The Rabbids are the 'Stars' here!
Here's my favorite, 'Rabbids can't infiltrate games conventions'

But more about the games.
The list includes, a set of; first-person shooters, Dancing games, Cow throwing, Milking pigs, Slapping out-of-tune choir boys, Running with a bomb, Penalty shoot-outs, Mazes, Warthog races, Bomb detecting, Bat flying, Sky diving, and Skip rope amongst many others.
The most imaginitive uses of the controls come from, the bomb detecting game. Rayman has to find his way through a mine field to return a piglet to it's mum. The piglet can detect where the mines are and lets out a squeal if your close to one. You hold the Wiimote to your ear and use the nunchuck the steer Rayman. When you here a loud 'Squeal!' through your Wiimote, go a different way!
In 'Cow throwing' you have to spin the Wiimote over your head as if you're plate spinning.

The dancing games you have to flick the Wiimote and nunchuck in time to music to make the Rabbids dance. The running games, like pentaly shoot-outs or running with a bomb, you have to shake the Wiimote and nunchuck up and down as fast as you can.
When Rayman is sky diving you have to tilt the Wiimote to steer him through rings. 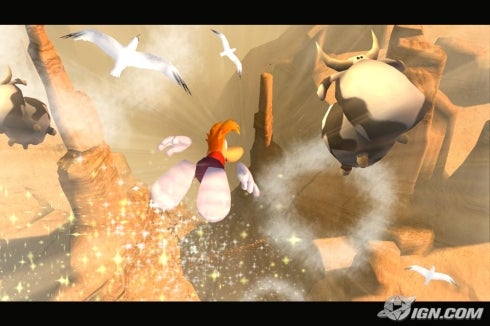 And the fisrt-person shooter, you just aim and shoot, reloading with a flick of the nunchuck. You can also play this in a VS mode, or a Co-op mode in 2 player. Graphics. Excellent. They weren't trying to be realistic, just very funny, and I think they definitely succeeded! 7/10

Gameplay. Good. I have spent many an hour on this game. My girlfriend and I have both completed it at least once, and we occastionally still work our ways through the 'Score' mode. Although we have found one game, 'Bunnies can't dance', that has a glitch, and this makes this game uncompleted. 6/10

Controls. Brilliant. This was my first 'mini-game' compilation and the different uses of the controls impressed me very much. I had no idea that the Wii could be capable of such versatility, and unique controls that coincided with with your gameplay experience. 8/10

Overall. A super set of games. Funny, smart and adventurous! Although I'm not playing on it like I used to, it is still great to pick up when I'm alone or with friends! 7/10

Here's hoping the next one will be thrice as good!


And now that the Rabbids are huge stars, they can advertise almost anything...

Not a big fan of rayman, but wow this one looks pretty good, nice review, changed my opinion on rayman a bit!
Werbung:

Nice review, love the pics in the end!

J
How to Make Android as Secure as Possible